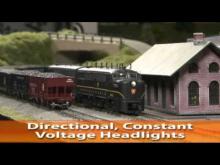 Check Out The Details And See It In Action: The HO Alco FA-1 Diesel

February 26, 2014 - M.T.H.'s HO Alco FA-1 Diesel locomotive has begun shipping in Pennsylvania livery with additional roadnames slated to deliver over the next two months. Check out the locomotive's details by clicking on the video icon to the left and see the locomotive in action.

The brawny good looks of Alco's FA and PA cab units, however, have endeared them to railfans and modelers for more than half a century. Designed to compete with EMD's FT four axel freight locomotive, the FA-1 contained many of the same design elements but used a new 12-cylinder 244 engine. With its distinctive flatnose cab and ribbed grille enclosed headlight, the FA-2's were considered by many rail fans to be more handsome and powerful looking then its F-3 and F-7 competitors. By pairing up with General Electric in the 1920's Alco inevitably condemned itself to ride on the coattails of EMD's F-series line.

Built by Alco and EMD in New York between 1946 and 1959, the FA-1 was designed primarily to haul freight, as they did not have the space at the rear of the engine compartment to accommodate a passenger-service steam generator. Externally as well as mechanically the FA-1, designed by Ray Patten, appeared very similar to the ALCO PA models built around the same time period. Distinguishable from the FA-2, the FA-1's shutters were at the far end of the carboydy, this was later changed to accommodate the steam generator that would be placed behind the radiator.

M.T.H. is proud to present the HO FA-1 in the unmistakable colors of Great Northern, Baltimore & Ohio, Union Pacific, Pennsylvania and Lehigh Valley. These streamlined diesels will bring beauty and power to any HO layout. Each Alco FA-1 AB diesel set includes one twin-motored A unit and twin-motored B unit. The A unit has full directional lighting and both the A and B units feature 2 Scale Operating Kadee Compatible Coupler. Like all HO diesel locomotives, the set is equipped with the legendary power and performance of Proto-Sound 3.0.