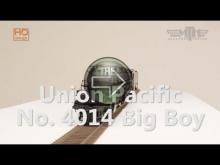 December 18, 2019 - M.T.H. Electric Trains will be releasing the Union Pacific HO Big Boys, including No. 4014 next month. All locomotives will include our first-ever HO steaming quillable whistle feature as part of the Proto-Sound 3.0 onboard digital sound and command control package.

The locomotives were featured in the 2019-2020 HO Catalog and are the first of several steam locomotives featured in the catalog that include the steaming quillable whistle feature. The feature can be activated using the DCS Digital Command System or any DCC Controller by triggering the F7 key. When using the DCS system, in addition to the steaming whistle feature, users can actually "quill" the whistle sound by ramping up and down the whistle pitch. As the pitch gets higher, more "steam" is released from the whistle. Check it out in the video in the upper left corner!!

About the Big Boy

Writer Henry Comstock beautifully described the Big Boy’s place at the apex of steam engine history: “A Union Pacific ‘Big Boy’ was 604 tons and 19,000 cubic feet of steel and coal and water, poised upon 36 wheels spaced no wider apart than those of an automobile. That it could thunder safely over undulating and curved track at speeds in excess of 70 miles an hour was due in large measure to the efforts of two long-forgotten pioneers. As early as 1836, the basic system that held its wheels in equalized contact with the rails was patented by a Philadelphian named Joseph Harrison; and a French technical writer, Anatole Mallet, first thought to couple two driving units heel to toe below one boiler in 1874.”

This enduring symbol of American railroading returns to the rails featuring our industry-leading speed control and synchronized puffing smoke output, as well as authentic articulated chuffing sounds with the front and rear engines drifting in and out of sync.