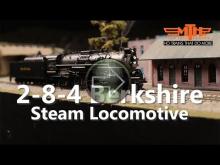 October 8, 2020 - The M.T.H. Berkshire steam locomotive with our all-new steaming quillable whistle in HO scale has arrived and is now shipping to M.T.H. Authorized Retailers. One of many features of the onboard Proto-Sound 3.0 Digital Sound and Command Control package, the whistle feature can be triggered using the DCS Digital Command System or any DCC Controller's F7 Function.

The Nickel Plate’s 2-8-4 Berkshires belonged to one of steam’s finest family trees. The first 2-8-4, Lima Locomotive Works A-1, inaugurated the superpower era in 1925. A four-wheel trailing truck allowed the A-1 to have a larger firebox and boiler, producing a combination of power and speed never seen before in a steam locomotive. Initially tested on the Boston and Albany Railroad, the new wheel arrangement was dubbed the Berkshire after the mountain range it conquered on the B&A.

The Van Sweringen Berks re-join the M.T.H. lineup in 2020. The Nickel Plate version is modeled as it appeared in the 1950s, sporting illuminated number boards and a Mars light added above the headlight. While these are not the first HO models of these iconic steamers, we believe they are surely the best, with superb detailing, die cast construction for great pulling power, synchronized puffing smoke, steady speeds down to three scale miles per hour, and great sounds that include the actual bell and whistle from restored No. 765.

Click on any of the offerings on the left side of the page to learn more about the features and where to buy.